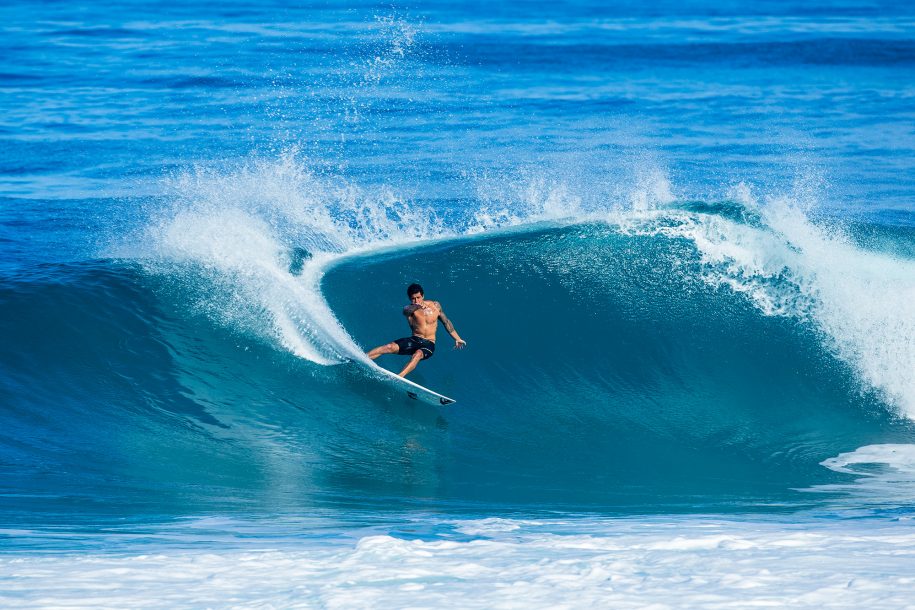 The set-up is simple. Pro surfer Ezekiel ‘Zeke’ Lau is sitting at a table. In front of him, a computer where he plays, describes, explains, analyzes, and re-plays videos of him attempting different tricks in the water. You can see the frustration on his face when he misses a stunt he was trying to pull. A smile when he succeeds.

A Rollercoaster of a Career

Lau was born in Honolulu to a family that, surprisingly, was more focused on playing and coaching football than riding waves. He did bond with his dad surfing in his hometown, and probably it was his passion for the discipline required for playing sports at a high level that pushed Lau forward. Whether it’s North Shore at 6 a.m. or the airport at 4 a.m., his father was the one person who helped him shape his career as a surfer.

Zeke was already standing out from his peers by the age of ten, but his parents wanted him to finish high school. So, it took him a while to truly make his mark in the circuit. However, stepping back and watching gave him the time he needed to improve his surfing skills.

Lau reached number 36 on the 2013 Qualifying Series after taking a huge win at the Vans World Cup at Sunset but fell off the top 100 the following year. However, after some ups and downs (including a back injury), he finished off 2018 at number 20 on the Jeep Leaderboard, jumping up nine spots from 2017. So, no doubt, he’s determined and hungry for success.

Perseverance and discipline seem to be the name of the game for Lau. Last year he launched his own YouTube channel where viewers can learn more about him and the rigorous training that allows him to shine on the water. Besides videos like the one discussed above, where he watches himself surfing, users can also learn about his stretching exercises or hear him discuss the importance of being present when practicing sports. Take his recently bought home, for example. The only thing he cared about when hunting for a property was to have a garage big enough to fit all his boards, a jet ski, and a place to work out.

The YouTube vlogs are also a fun look into what he calls the Hawaiian lifestyle. Meeting his childhood friends at a local beach to surf, reminiscing about adventures in the water, sharing stories under the sun. You can see Zeke sitting on a quiet Hawaii beach, wet hair and a board by his side in another video. Looking at the camera, he says: “I’m at home, and this is the place where I always want to be when I’m traveling.” It seems this proud Honolulu native is precisely where he wants to be.

Interested in taking a surf lesson with Zeke? Book a stay with us, and we would be happy to arrange one for you!